Now that I’m cooking again, I’m back to blogging about favourites in the kitchen, which is Hainanese Chicken Rice.

Hainanese Chicken Rice is one of our favourite home-cooked dishes and you can prepare it with Asian Home Gourmet’s instant sauces (No added MSG, no artificial colours), which a beautiful Mom with two handsome sons, posted to me all the way from Singapore (love!!!).

Many people say that Singaporean food is tasteless but nope, I can personally vouch the authenticity of the chicken rice mix of Asian Gourmet – 100% original taste of Hainanese Chicken Rice!!! Cured my homesickness immediately ^_^

After Asian Home Gourmet’s steamed chicken rice, I find that it is best paired with Taho’s Lemon Chilli Sauce (Made in Singapore).

I was introduced to this delicious chilli sauce when a Singaporean mom moved back home and she gave me LOADS OF STUFF including 2 sauces: another was a sambal and this, which we LOVE!

It’s something like the dipping sauce you’d get with a nice plate of Hainanese chicken rice, but thicker, richer and more pungent. 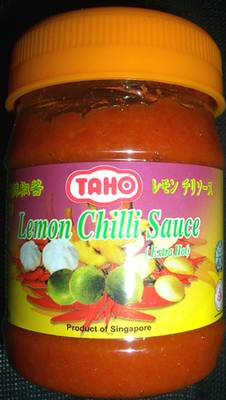 As you can see, the label itself shows that the lemon chilli sauce include garlic, ginger, red chillies and what look like limau kasturi (calamansi)? They’re marketing it as “lemon” 🙂 Whatever – it’s INCREDIBLE!

We’ve used it as a dipping sauce for home-cooked Hainanese chicken rice and also for grilled meats. Yummy! You can try it out if you can get your hands on it.

If you have tasted Nando’s Peri-peri sauces, then you’ll understand that garlicky, lemony, tangy chilli taste that I am talking about >_<

In case you can’t find the lemon chilli sauce, I think that this set of Nando’s peri-peri sauces would be a close second. Makes a nice gift too!