(标准中文) published by the People’s Education Press was my son’s textbook this year. 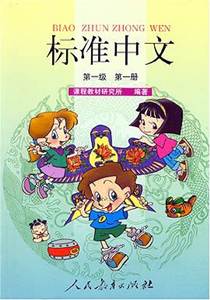 It’s an interesting textbook, which features a Chinese boy and an American boy who engage in conversations at school. Both of them learn about each other’s cultures as they progress in school.

This impressive-looking new series is designed especially for young learners of Chinese, with a total of 3 texts for each of 3 levels. The student will, at the end of the series, have learned about 2000 common Chinese characters, mastered pinyin, and have achieved elementary knowledge of reading and writing characters.

The lessons are well-designed, with many full-color pictures to help younger learners along, and audio tapes and videos are planned in the future.

Children learn a few key Chinese characters each lesson, which are reinforced through copying exercises, drills and substitution exercises. It’s quite a good book for children who are learning Chinese as a foreign language because pinyin is written below each Chinese character.

If you are an American looking for a suitable beginner’s Chinese book for your child, you may find this book suitable. You can start with Standard Chinese, Level 1, Vol. 1 (Bilingual).

However, children who have already mastered pinyin and are learning to read Chinese characters or hanzi may be hampered in their efforts since pinyin is written for every Chinese character. I noticed that my son would read the pinyin instead of the Chinese character whenever he read from this book!

As I’ve mentioned earlier, this set of Chinese textbooks are most suitable for American children learning Chinese as a foreign language. You Can Do It! (加油 jiā yóu!)