After eliminating all the processed oils from my kitchen, I was left with only butter and olive oil for cooking.

Butter is great but it’s not meant for Chinese stir-fry dishes because you can’t turn on the heat.

Plus, Chinese vegetables taste a bit strange stir-fried in butter. I stir-fried a huge plate of bok choi for dinner tonight, which is OK but it reminded me of butter on steamed veggies, you know?

Olive oil is NOT meant for cooking and should only be used for salads.

What does that leave me with? LARD. Oh yeah, good old-fashioned lard, which my late grandmother used for most of her cooking.

Before you get grossed out, read this article about “How Vegetable Oils Replaced Animal Oils in the American Diet“. I bet you’d never look at the P & G logo at the back of your shampoo in the same way again. And you’ll learn about a new (old) poison called cottonseed oil.

Since I am surrounded everywhere by pigs and pork in China, I decided to make my own lard. I remember watching my dear grandmother make it when I was about 8 or 9 years old 😀

The butcher’s wife is an intelligent, patient and sweet lady who knows what I want despite my badly pronounced Chinese.

When I told her that I wanted to make lard, she looked at me hard for a while but smiled and then proceeded to flip through the slabs of pork fat.

Finally, she found one that satisfied her and then kindly sliced away the pig skin and trimmed away bits of meat. Isn’t she an angel?

I am truly grateful to her because she gave me an excellent sample from which I could judge other cuts of pork fat.

Another batch of lard I made from a supposed premium cut of pork fat (cost me RMB36) from the supermarket was not as good.

2. Cut the fat into small cubes

I cut the fat into 2 cm sized cubes because they shrank nicely into bite-sized lard chips, which make a crunchy snack for the kids.

It’s better to rinse the pork fat first before you cut them into cubes. I was so excited about making my own lard, I’d cut the cubes first before rinsing the fat: 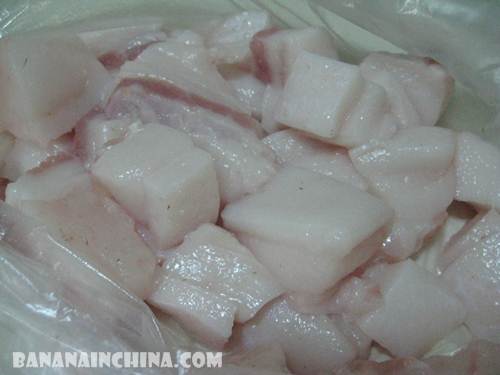 3. Place the pork cubes into a wok and warm it up on medium heat.

You’ll soon see the fat melting away. Stir the pork cubes occasionally to avoid the fat sticking to the wok. 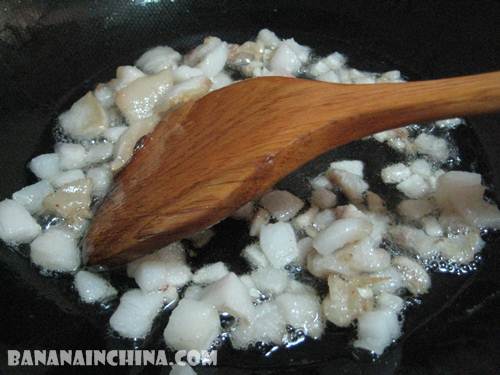 See how the pork cubes have shrunk?

4. Turn off the heat once you see golden brown lard chips

The lard is ready for you to store into a glass bottle.

The picture below shows you the lard chips together with the lard, which was how my grandmother used to store it. She used an earthen pot, though, which is what our favourite char koay teow seller would use too. 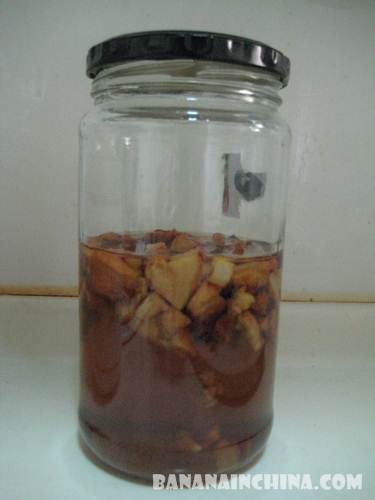 Of course, char koay teow is best fried in lard 😀

5. Store the lard in a cool corner

One batch of lard lasts me a week, which is good because my cooking oil is now freshly prepared on a weekly basis. I think lard can last for about 2 weeks stored at room temperature.

If you store lard in the fridge, it solidifies into a thick, white paste – pretty much like Crisco and shortening except that these two copycats are smoother. Just let it stand at room temperature for a while before you spoon it out for cooking.

Since lard chips soaked in oil get soggy after a while, I removed them from the oil and stored them in an air-tight container. Can you believe that my boy loves them as a snack?

He’s also requested for me to pack them in his lunch box. I had to remind him NOT to share them with his Muslim friends because some of his friends have been enjoying his snacks and lunch.

Anyone else using lard as a cooking oil? We love it!