Do you know Charlie and Lola from Lauren Child’s “I will never ever eat a tomato?”

Did you know that a tomato is a fruit?

Well, I didn’t because I didn’t use to like tomatoes as a child. That’s probably why I have a picky eater now who hates tomatoes just as much as I do.

I think I only started eating tomatoes when I got tired of picking them out of my hamburgers or I got curious because my husband devours EVERYTHING in his hamburgers – onions, pickles, salad dressing and tomatoes – and he does it with such relish, I probably thought, “Wow…the burger must be really good if he’s eating it like that…” 😉

Before moving to China, I took a crash course in the names of essential food items in Chinese, which include fruits and vegetables, using children’s posters.

There must be some linguistic war happening in the world of Chinese / Mandarin as well because tomato is listed as fān qié (番茄) and xī hóng shì (西红柿).

The word war extends into the supermarket and wet markets as well because I’ve often asked for fān qié (番茄) and get blank looks until I say xī hóng shì (西红柿) and vice versa.

When I bought my first tomatoes, I found the species in China fascinating because they were a bright, tomato red and they were almost seedless. 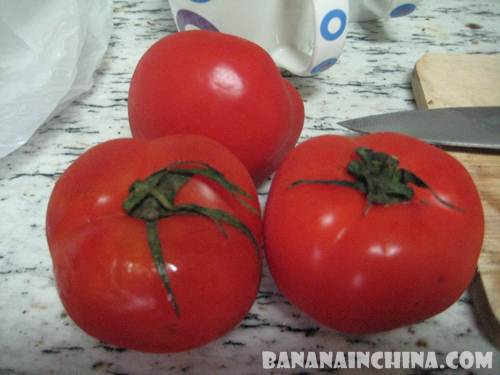 One of things I used to hate about eating a tomato are the seeds and the sourish taste. The tomatoes in China are really juicy and not sour at all, which make them a joy to eat on their own or in a fresh salad 😀

Here are the sliced tomato: 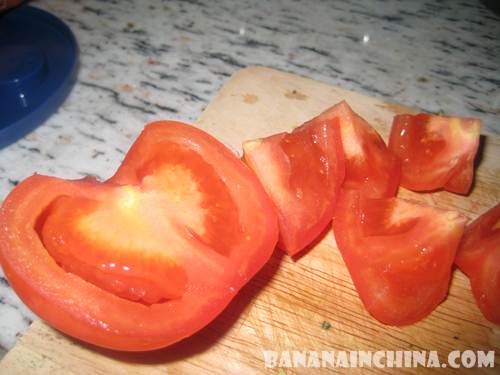 When I talked about tomatoes with a colleague, she told me that tomatoes in China are often sprayed with pesticides (read this article, which also warns shoppers against aubergines – there goes the fish curry!, Chinese cabbage – does this include xiao bai cai or just the da bai cai, which I don’t cook? and string beans – one of my kids’s favourite!!!). Now you know why it’s depressing whenever I talk about food in China?

Nowadays, my colleague NEVER eats tomatoes and even if she does, she’ll remove the skin.

I always remove the skin and seeds when I use tomatoes for cooking the children’s foods and after I heard that, I have not used tomatoes in soups or stews anymore.

On a lighter side, if you need to buy ketchup at the supermarket, say 番茄醤 fān qié jiàng. I haven’t figured out how to say tomato puree yet since it’s an alien concept to the mainland Chinese.

By the way…are you sure your Italiano tomato paste, tomato puree or pasta sauce are REALLY “Made in Italy”?