A few days ago, my son showed me the scarecrow that he’d built: 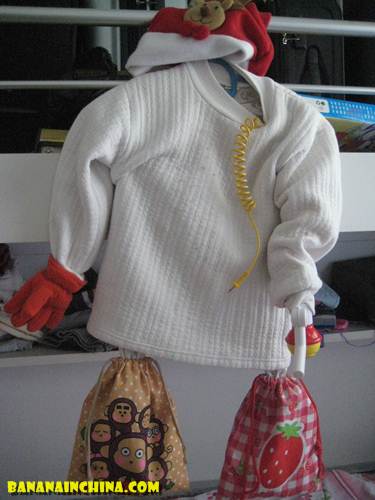 Dr. Frankenstein admitted that the legs look a bit funny but he had no choice. He lacked materials LOL

He’d hung the scarecrow up on the double-decker bed (in the children’s room a.k.a store room) on display for us to see.

Then, he announced to me that he wants to build a robot and that I the Super Mom, must get all the robotic materials ready for him.

The “boss” continued with the list of materials he’ll need for the robot:
– chicken wire
– buttons for eyes and the remote control
– wires
– paint for colouring

When I suggested the use of carton boxes for the robot body, he looked at me with disgust.

When I showed them to him, he didn’t say YES or NO.

He continued to describe the robot that he’s going to build: the robot will be a big, moving, walking man like Hubby!

To stall him (and to encourage him to write down his ideas), I told him to go back to the drawing board to sketch out his robot. That way, I’d be able to shop for suitable materials if I see them. Dr. Frankenstein agreed but said that he’ll only do that tomorrow because he’s tired today. Good grief!

I was planning to buy him some art and craft materials since he *loves* building with his wooden blocks and Lego but now, I guess I should look into model robot kits too!