I was a Cantopop fan during my teenage years and Leslie Cheung (Cheung Kok Wing) was one of my favourite actors.

Dinner time was fun because we’d be watching HKTVB drama serials and movies like “All’s Well That Ends Well“, “Chinese Ghost Story“, “Happy Together” and “A Better Tomorrow”.

In case you didn’t know already, Leslie Cheung was a handsome actor and singer.

His live concert tickets are almost always sold out!

Later, he matured and mellowed, which was he was so realistic in his movies, especially in “Farewell, My Concubine“, which caught my attention because it featured a Chinese opera actor who was cast in lead female roles.

I never got to watch “Inner Senses“, which is about a young man faced with depression…I may want to watch it because it seemed that poor Leslie was filming this movie when he committed suicide.

I was watching a Chinese concert (in Mandarin!!!) on CCTV 4 one night when I did a double-take: 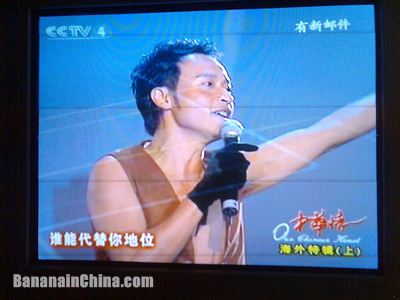 That got MY attention alright. I spent a while scrutinizing the singer as he was singing a song in Mandarin, not Cantonese. He looked like a close Leslie Cheung but when he turned to the other side i.e. we could see his left profile, I could tell that it’s NOT my beloved Leslie Cheung. Sigh…

A while later, another familiar-looking Hong Kong superstar came up: 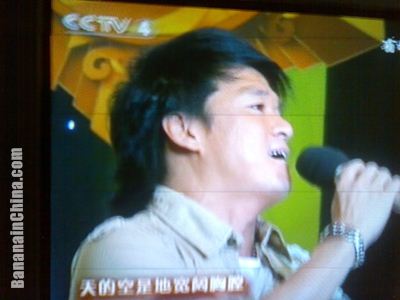 The second singer is Emil Chau, aka Wakin Chau (周华健) and that’s all I know about him.