Oct 1 was China’s National Day (guo qing jie) and for 2009, China chose to showcase its armed forces in their full glory at Tian’anmen Square, culminating in the unveiling of its “giant nuclear-capable intercontinental ballistic missiles.”

The camouflage nuclear missiles, riding on 18 launch vehicles, rumbled past Tian’anmen Square and were reviewed by Chinese leaders and foreign guests.

The parade, marking the 60th anniversary (1949-2009) of the founding of the People’s Republic of China, reached a crescendo of excitement when the gigantic vehicles, each had 20 wheels, came to the center stage, carrying “remarkable symbols” of China’s defense muscle.

(Photos of the missiles are at: Xinhua News)

I wish that I were still in China to watch the national day parade on TV because we don’t have CCTV here and anyway, you get to see more through the local TV stations!

When we first arrived in China, I didn’t know what to expect living in a Communist country. After all, life here is pretty normal.

When I saw the Chinese version of the “Uncle Sam Wants YOU” recruitment (or promotion?) poster, I was unfazed. 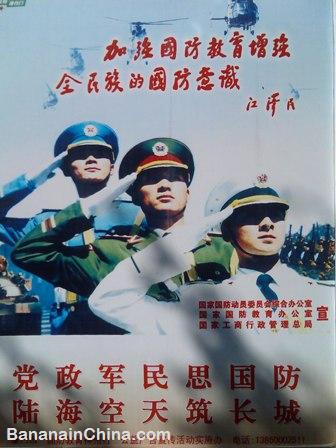 Check out the Hummer (or is it Humvee?) 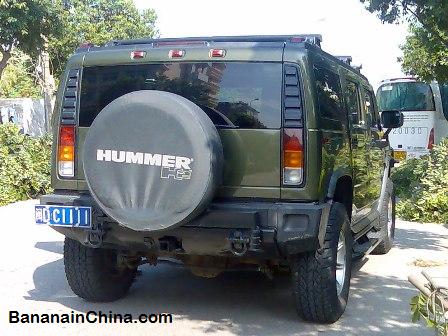 Then, I started to notice “military-themes” in everyday scenes around us e.g. the firemen gathered for a drill with 2-3 fire engines near some apartment blocks.

The boy’s preschool even held TWO fire drills (with a fire engine AND firemen) within just 6 months! When was the last time you experienced a fire drill with all the works?

(By the way, the fire chief approached me when I was snapping the photos on my mobile phone. I told him that my little boy LOVES fire engines and after showing him my photos, he relaxed and smiled. And yes, the boy demanded to see the fire engines AGAIN and AGAIN for at least a week!)

One day, Hubby’s colleague gave us a lift back home and I had the chance to walk through the underground carpark. Nothing interesting, right? 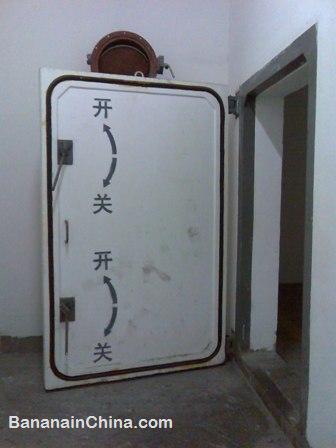 That is until you have to walk through THIS door to get upstairs.

The men were cool (they see it everyday) but when, I saw this, I was like:

“Oh my God! That’s a bloody door to a vault! The underground carpark is a bomb shelter!!!”

That’s when I realized just how “military” this Communist country is.

I see strong attempts to influence the children from young. My tall and highly-active boy is strongly encouraged in his physical activities (potential soldier!) at preschool.

I was amazed by his fascination with the Monday flag-raising ceremony in preschool (I hope it’s just a phase!). On the first day we were there, he immediately went to join the 4 “selected” older children who stood ramrod straight with their eyes raised before the flag!!!

The Principal just glowed with pride and went on to emphasize that ONLY the good, obedient children had the opportunity to stand there. She explained that this “xiao peng you” is still small but is already a good example 😛

Seeing this, you can bet I hid the military-themed Chinese preschool colouring books.

I don’t like military-themes e.g. dressing children up in fatigues or letting them join in military-like activities e.g. Canada’s Kiddie Commando Exhibit.

Why and how could anyone market the military lifestyle as “fun” when there are child soldiers in countries like Afghanistan and Palestine???

An episode of “Army Wives” is enough to make one appreciate the challenges they face.

After a while, I started to accept the strong military presence as a part of our daily lives – the crime rate is low although it rises during the Spring Festival (Chinese New Year) but we seldom hear of snatch thieves or break-ins.

Crime is still there e.g. rape, robberies and kidnapping but the incidence is low and the culprits are usually apprehended quickly based on the updates I hear from my Chinese-speaking friends.

An Army officer lives on our floor and he is a fine example of one who “serves to protect and maintain the harmony”. One night, the boy was being *extra naughty* at dinner time i.e. not coming when I call and not eating what I fed. Hey, my cooking ain’t THAT bad.

Since the hot food was cooling down in the cold weather and I got so mad I threw him out of the apartment (we can still see him through the iron grille)! He started crying and I asked if he was going to eat his dinner when the Army officer appeared, checking on a potential case of child abuse…

The boy freaked out because the Army officer is tall and big and still in uniform! I opened the door quickly to let him in as he scrambled into my arms. Our neighbour was smiling but I told him:

“He’s being very naughty not to eat his dinner. Actually, he’s afraid of you now because he thinks you’re the police coming to catch him!”

Hearing this, he smiled apologetically and backed off, assuring the kid not to be afraid, told him to be good and that he’s leaving now. Hahaha, you can bet the boy behaved during during dinner that week 😉

But I’ve also witnessed the Army’s brute force in implementing the law on the street vendors. Some of these errant small businesses extend their their goods’
display onto the common area i.e. the pedestrian walkway.

One day, I was shopping for something when I heard loud shouting and the shop owners frantically dragging or pushing the metal frames displaying bags, hair clips, clothes etc into their shop area.

Stepping outside, I saw army personnel, with a senior Private (?) leading the way, pushing down the metal frames that could not be rescued in time roughly onto the ground. They were also loudly shouting at the shop owners and writing out fines…

I’m all for law and order and the shop owners ARE in the wrong for obstructing the walkway with their goods but I didn’t like the way they handled them. But then, how do you handle stubborn people? The metal frames were back on the street the next time I went there!

While I felt relatively safer in China, I’m not sure I’d like to live under military rule. How about you? How do you feel?

REVIEW: Are you there God? It’s Me, Margaret by Judy Blume
Week 34 – Preparing for the Chinese confinement