Last week, my kid and I were coughing, coughing and coughing and gagging on a lot of phlegm that I swear it felt almost as bad as the croup he got last year.

Due to my pregnancy, I can’t take ANY cough medicine now, so I resorted to the good old Nin Jiom Pei Pa Koa – Sore Throat Syrup

, which a trusted pediatrician from Beijing had recommended to me when I had a nasty cough. 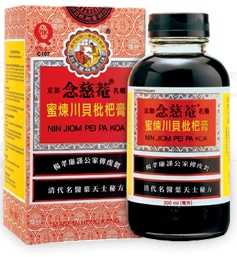 compared to my boy who was taking Rhinathiol (Promethazine)!

Because he was running a fever a few days, he had to take paracetamol (which he HATES) that he found Rhinathiol more pleasant.

However, after a few days of Rhinathiol, he started to reject the “sweet orange medicine”.

When he saw me taking the Nin Jiom Pei Pa Koa

, he asked for the “black medicine”. True enough, his phlegm subsided and soon, he was coughing less and less!

Now that more and more people are infected by flu or cough, I’ve been recommending this sweet and pleasant-tasting loquat syrup that claims to:

Try it if you like – just make sure you get your bottle from an established Chinese medicine hall. Nin Jiom Pei Pa Koa – Sore Throat Syrup – 100% Natural (Honey Loquat Flavored)

is made in Hong Kong.

Even my Mum was impressed that she’s taking it and asked my sister to buy it for her husband and kids who are also coughing now.

We find that it’s more effective mixing it in warm water (1 tsp for me, 1/3 tsp for him) three times a day.

Notes from Wikipedia:
1. A study at the China Academy of Traditional Chinese Medicine published in a 1994 article, “Pharmacological studies of nin jion pei pa koa”, indicated that Pei Pa Koa had significant effect on relieving coughs, removing sputum, relieving asthma in vivo (on living subjects) and in vitro (in a lab).

2. At one point in 2006, Pei Pa Koa was recalled in the Philippines as the Bureau of Food and Drugs found Formalin (a chemical used for preserving cadavers) in all Pei Pa Koa products in the market. However, a few months after the recall, Nin Jiom Pei Pa Koa

was released back into the market as Formalin traces were no longer found in the new Pei Pa Koa product line.