When we first arrived in China, shopping for fruits was one of my priorities because my tot LOVED bananas then.

But the real joy is finding the well-stocked fruit stalls at the market. Why? I found that they had more variety, they were fresher and of course, a lot cheaper.

For the Chinese, fruits play a huge role in their diet especially where the seasons are concerned. When my tot and I kept falling sick at the turn of the seasons, some kind Chinese friends advised us to “follow the fruits”.

Basically, we should consume the local fruits in season because the fruits would provide the necessary fluids to balance the “yin” and “yang” of our bodies.

Hmm…that made sense because I recall that we were eating mostly imported fruits (ones we were familiar with) e.g. bananas, grapes, papaya, apples, oranges and watermelons.

In the picture below (taken during autumn), you can see local bananas, watermelons (dark green skin – yellow fruit; stripey skin – red fruit), pears (shui qing li), which we have tried. 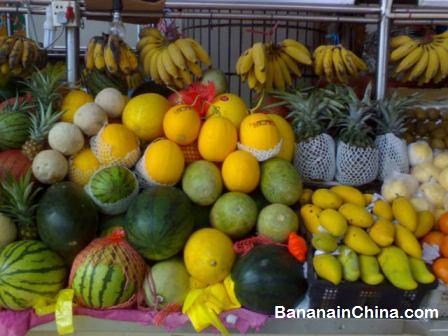 We have not tried the local pineapples (called buo luo rather than huang li), which are famed for being very, very sweet but nobody’s a fan in our family…

The mangoes are imported from the Philippines, I think.  I’ve not tried the bright, yellow fruit as I’ve no idea what they are!

Other than grapes, apples and grapes (from the US) you can see an array of fruits imported from Asian countries: 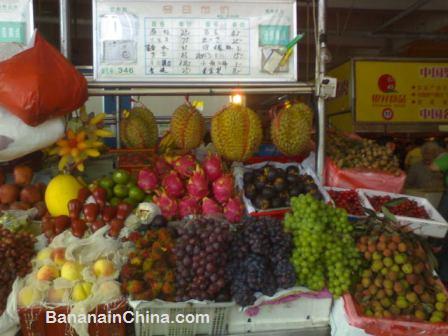 We were buying Dole brand bananas (from the Philippines) for a long time and Hubby even joked that our tot was going to eat us out of a house and home because we had to buy a comb of bananas every 2 days! 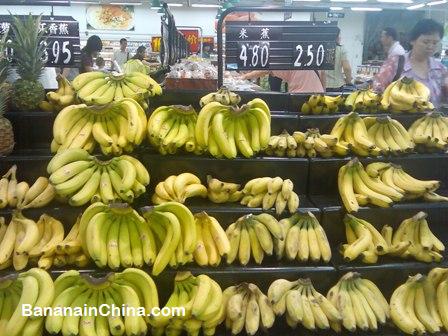 Dole bananas are a large, firm variety – a comb was selling at about RMB15-16. Due to its high price, only expats or the more affluent Chinese bought them…

I was quite happy to find the local bananas at the fresh market – strange why they are not sold in the supermarkets. The local bananas are what we’d call pisang awak (sounds awful translated into English because it literally means “your banana!”). 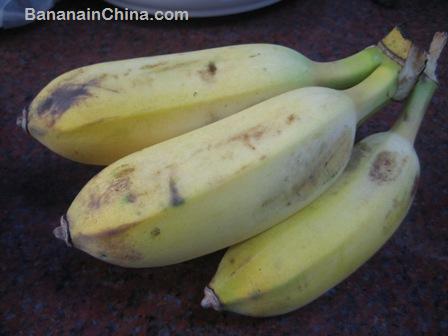 A comb of local bananas sells for only RMB6-7 and I actually prefer them because my stomach didn’t feel as bloated after consuming them.

Because my tot loves dragon fruit (pitaya), regardless whether its the white or red variety, I frequently buy this fruit from the market. I was such a fan of this fruit that the seller asked if I was a Vietnamese! LOL 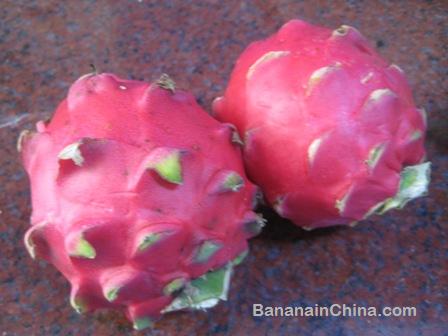 Personally, I prefer eating the white dragon fruit because it’s less sweet. Plus, there’s no red colouring. Did you know that there’s yellow dragon fruit too?

Anyway, after hearing that the tiny seeds of the dragon fruit remain in your guts long after you consume them, I’ve limited the tot’s intake…

Coming from a tropical country, we had some fun during autumn, winter and spring trying out some of the local and imported fruits.

Mmm…they start appearing in summer (July) and are pretty much available right up till the beginning of winter (December).

With the help of my friendly fruit grocer, I learned that there were “soft” (ruan) and “crunchy” (qui? cui?) types. We prefer the soft variety and of course, the sweeter the better. 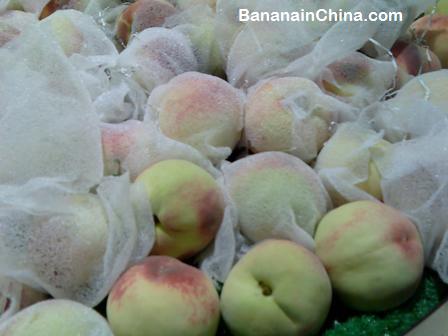 Peaches shown above are the average peaches – after a while, I find that there is a slightly bitter aftertaste after the intial sweetness.

There is another reddish type with a reddish flesh. They are quite OK but you have to get really sweet ones to enjoy – they tend to become mushy too if they are too ripe.

The premium peach is the “shui mi tao” from Beijing! I think the phrase “peaches and cream” come from such peaches because they are a lovely peaches-and-cream colour, quite large (sits nicely in the palm of my hand) and perfectly sweet with a white flesh.

If you visit Beijing during the late autumn and early winter, you’ll find scores and scores of hawkers selling them by the roadside.

Cherries are imported from the US but we suspect that some may be grown locally because the price varies between RMB15-45 per jin. For the record, I’ve not been that crazy to pay RMB45!

Called “yin tao“, Hubby and I enjoy eating the ripe, sweet cherries. The tot? He claims to like them too but will only suck on a single cherry like a lollipop. 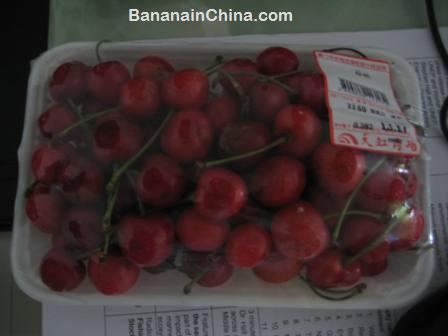 Olives Fresh dates make their appearance early in the summer and even though I’ve seen them for a while, I didn’t realize they were olives.

One day, one of my favourite fruit stalls (wo-manned by two sisters) urged me to try one. I was very, very reluctant but was delighted to find that it’s crunchy and sweet! 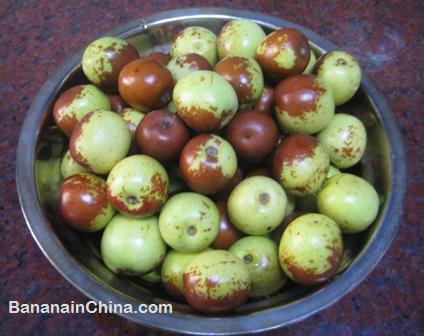 I bought a bunch to eat and enjoyed munching on them as a healthy snack. If you leave them outside for a day or two, you’ll find that they turn brown and slowly start to shrink.

However, they are not as smooth as the olives you’d find in a martini …

Initially, I thought these are mangoes but again, my favourite sisters peeled one off for me to try. These fruits show up at the end of Spring when the days start to turn warm. 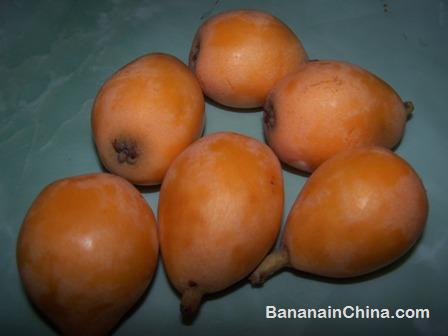 If you see this fruit during your visit to China or elsewhere (I think they could be exported), be sure to choose orange-y ones as they are and sweeter. Simply peel off the skin using your fingers and take a bite into the firm flesh. What remains are kidney-bean sized seeds.

Strawberries are seen here and there during the cold months of December to January – we just LOVED eating them when they are in season because they are SO, SO, SO big, juicy and CHEAP. We can get a big bunch of big, juicy, sweet ones for about RMB10-12! 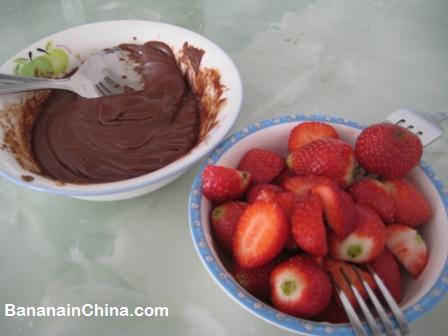 My fussy tot will only eat the *really sweet* ones and even so, after many, many threats. I once made a chocolate fondue for us to dip the strawberries in – guess what, the tot nibbled off all the chocolate and just kept dipping the SAME strawberry into the chocolate sauce!

I give up sometimes…

Hope you’re having a fruity Friday 🙂