This is a backdated post of my attempt at frying Penang “char koay teow” (stir-fried rice noodles with prawns). As I was craving for Malaysian hawker food during the earlier stage of my pregnancy, I decided, “If I can’t buy it, then I’ll cook it!” 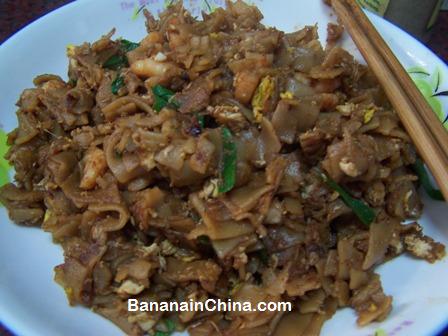 To our delight, the fried koay teow turned out yummy for Hubby and me – I cooked it for breakfast twice and once for my lunch 🙂

Our toddler? He only wanted the prawns!

Hubby was my kitchen assistant (or culinary spy!!!) because he helped to hand over the various ingredients.

Wanna try it? Here’s the modified recipe (to serve 2) below:

(* I used the exact amounts as the recipe called except for sugar, which I reduced by half.)

Method:
1. Boil a saucepan of water and then scald the flat rice noodles in it until soft. Set aside.
2. Heat the oil and stir-fry the garlic until golden brown. Increase the heat to high, add the prawns and stir-fry to sear the prawns. Add the noodles and the prepared sauce and toss for 2 to 3 minutes.
3. Make a well in the center of the wok, drizzle in a teaspoon of oil, then crack the eggs into it. Scramble the eggs, then combine with the noodles. Add the chives and season with salt and pepper. Stir-fry over high heat for about 1 minute. Serve hot!