To celebrate the Dragon Boat Festival (called Duanwujie) on May 28, two Malaysian friends invited the rest of the group to pack rice dumplings (zongzi) together.

Initially I didn’t feel like joining as I was tired from running a few errands but the thought of Hubby and the boy having no rice dumplings changed my mind. I’m glad that I joined in 🙂

When I was a kid, I remember my grandmother making all the preparations with the help of my aunts.

A woman of few words, my grandmother would rise up as early as 5 am to ensure that all the ingredients were ready.

My Mum would also pack the exact rice dumplings for us when we were kids. Boy, those days of having rice dumplings at recess in school or tea for almost a week. Heaven! 🙂

This time, I’d be packing for my own family. Led by a few master chefs, who would prepare the pork, the mushrooms and the glutinous rice, the rest of us were given individual items to prepare.

Since I was pregnant, I was given the least labour-intensive job, which was to hunt and prepare the chestnuts. In Malaysia, we used dried chestnuts but in China, fresh chestnuts are available.

Our master chefs have really high standards – I was to hunt for fresh ones, resorting to dried or frozen, if desperate. I tried a small wet market but finding none, I went to the bigger one and nearly panicked when I couldn’t see any.

Shopping for my own groceries: fish, chicken, vegetables and fruits, I’d reached the end of the market and was about to sound the alarm when I noticed a corner shop selling ready-made zongzi and dried leaves.

Hurrah! Seated next to that shop was a man selling the fresh chestnuts.

Phew, I immediately bought 2 kati as ordered (10 yuan/kati) and was told to soak the chestnuts in hot water to soften the skin for easy peeling. The chestnut skin feels like a thicker version of the pak kor (gingko) skin. 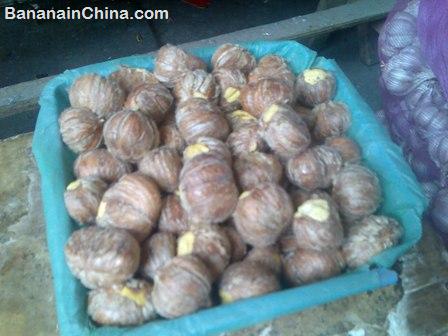 After that, I was to fry the chestnuts with shallots and garlic, dark soy sauce and 5-spice powder. Mmm, they smelled good!

Once everything was organized around a clothes rack, the master chefs started packing the dumplings. Many of them packed beautiful pyramids, which remained intact even after the cooking process.

Here are the other fillings that went into our rice dumplings: 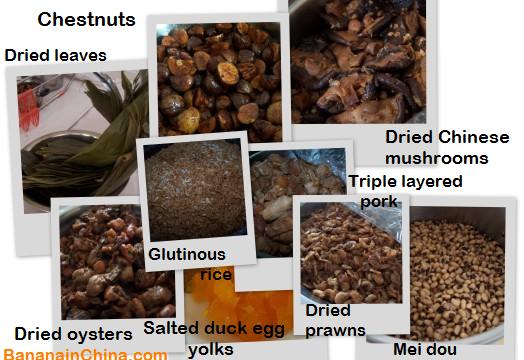 How to pack a rice dumpling

First, you take two bamboo leaves and form a cone shape and fill it with about 1 tbs of glutinous rice. Then, you fill it with whatever you wanted, usually one of each item. Mine didn’t have the oysters.

There was a debate about the packing:

– half of the ladies would fill the cone loosely (allowing room for expansion) while the other half would pack the rice into a compact shape.

I was from the latter camp but the challenge was to tie the zongzi! A dunce at arts-and-crafts, my zongzi always came up slightly longish and misshapen 😛

Will definitely try again next year and practise it under my Mum’s supervision!

The hostess put 10 dumplings into the pressure cooker so that we could taste the fruit of our labor before we went home. We’d started at 10.30 am and finished packing 160+ rice dumplings by 1.30 pm.

Here are the fruits of our labor – each of us had about 19 pieces to bring home:

Our ‘hostest with the mostest’ served us steamed yam cake (wu tao kou) and rojak (yum!!!) – this lady always has PLENTY of food at her place 🙂

Here’s my misshapen zongzi, which was delicious (and not ‘windy’ as I feared. Maybe because it was freshly-cooked and piping hot when I ate it?) 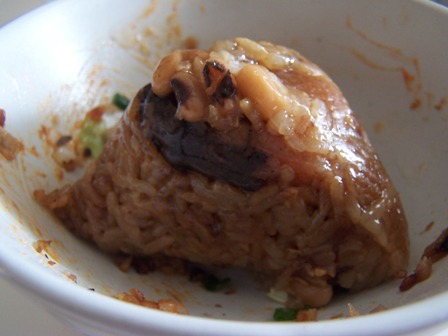 Back home, I boiled the rice dumplings in salted water for 2 hours – I had to rescue a few which had unraveled themselves ai-yo-yo!

Our 19 dumplings disappeared fast because:

Hubby and I ate another 2 this morning, which leaves 2 more in the fridge for the tot!

I was surprised that even my fussy tot wanted a ‘zhang’ and he even ate the pork. He needed a bit of threatening to eat the chestnut but during the weekend, he kept asking me for ‘brown colour’ for tea 🙂

Due to their popularity, looks like I’ll have to pack zongzi every year from now on LOL

Notes:
1. Here’s an overview of legends of the rice dumplings – the version I recall is of villagers throwing rice dumplings into the water to lure fish away from a famous poet who committed suicide.
2. In these parts, Duanwujie marks the REAL end of Spring because the days become markedly hotter after May 28th 🙂