Why am I posting so many food-related posts? As e are expecting visitors these next 2 months, I thought it’d be nice to show them what’s waiting for them here in terms of food…

When a friend told me there’s ‘roti telur’ here, I couldn’t believe it. Of course, I had to try it and was tickled to see the similar greased griddle here. The only difference is that a pair of tongs and a spatula are used to handle the dough.

Sure looks like roti canai, doesn’t it? By the way, roti canai is called ‘fei bing’ (flying cake) here LOL 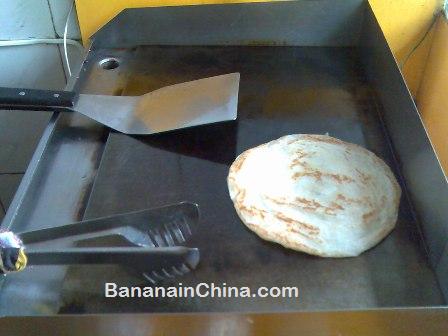 The ‘roti’ dough was premixed and it didn’t look as doughy or light like the Indian roti canai dough. Anyway, the lady browned the roti canai first before breaking an egg over it.

When it’s done, she placed it on a plate and sprinkled strips of cucumber over it. Healthy roti canai! Before she added the sauces, I asked what’s available: mayonnaise and chilli sauce. 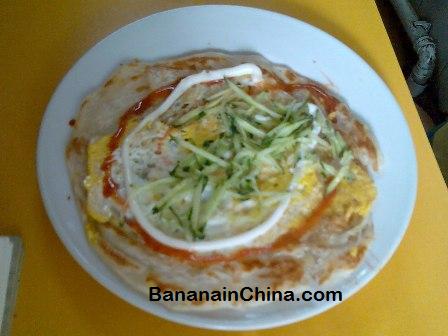 Then, she folded it in half and passed me my ‘roti telur’ wrap 🙂

How did it taste? Quite delicious especially when it’s piping hot! I didn’t know that roti telur mixed with cucumber, mayonnaise and chilli sauce could taste that good. Since I had it months ago (the stall isn’t near my place), I think I paid RMB3-5 for it. 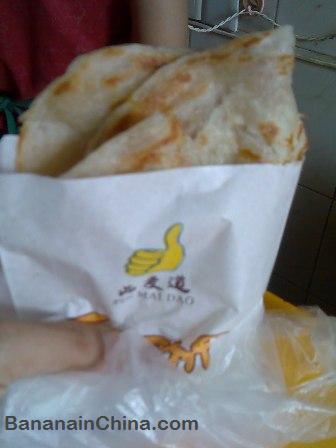 The paper wrapper had ‘Pin Mai Dao’ printed on it but I don’t think that’s the name of the snack.