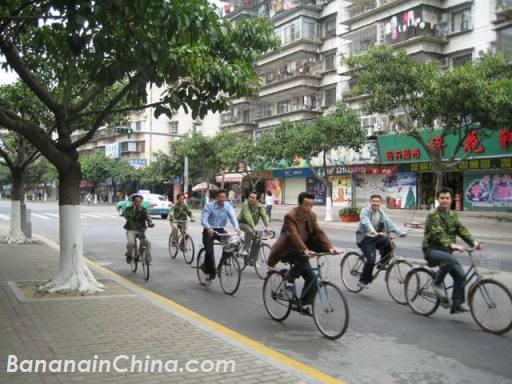 If you plan to visit or live in China and you don’t know enough Chinese to pass the driving test or are not entitled to a car or a personal driver, no worries!

You can choose to walk, ride a bicycle, take a taxi, take a bus and if you’re brave enough, even take a train 🙂

I think we became fitter after we moved here because we walked everywhere!

Seriously, we walk to the market, the mall, the post office, the bank, the China Telecom office, the restaurants, the bakery…it’s like living in Hong Kong or Singapore.

On these walks, I marvel at the number of ordinary people cycling on the road.

I used to cycle to school and definitely remember the thrill of freewheeling down the slopes with the wind on my face but definitely NOT the pain of pedaling up the hill!

The little town where we live in has a relatively flat landscape so cycling around is easy and covers more ground than walking, especially during the cool months of spring and early or late winter.

I was tempted to buy a bicycle and a friend wanted to give me her old one, which comes with a kid rack, but we were leaving on a trip and she was moving home the next day so no luck 😛

I thought it’d be fun to check out the other corners of the city a bit too far on foot but then I remember that I’ll need to lug the bicycle up the overhead bridge! 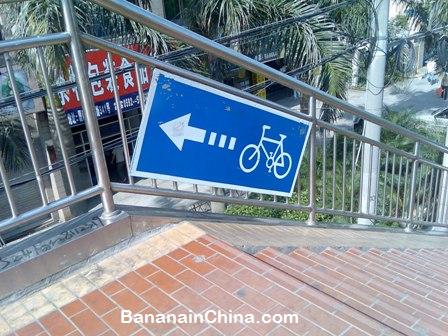 Although there are special lanes for people to push their bicycles up the overhead bridge, I think most people will look for a zebra crossing or a traffic light 🙂

Older men in their 60s or 70s ride the black, old-fashioned bicycles my Chinese boy cousins and friends rode on when we were kids.

The younger generation go for the electric / motorised bicycle (Made in China). 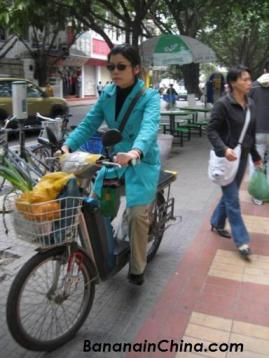 The electric bicycle looks fun – this lady still looks stylish astride a bicycle!

I think the electric bicycle needs a full day’s charge of electricity to last a few days. 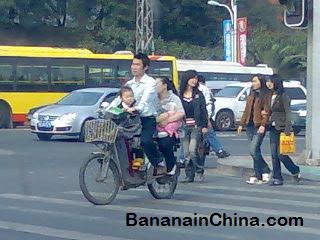 These bicycles are a Chinese person’s valuable possession, which is why they’ve got remote control and manual locks on them.

While the bicycle is the cheapest vehicle an average Chinese owns, it’s sometimes sad to see a family riding on a bicycle.

My heart really goes out to the pregnant mother riding pillion or the baby or a young child perched on the front – all without helmets. 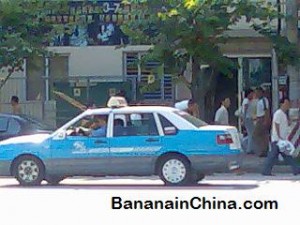 The taxi has been THE mode of transport when we first arrived.

Armed with the name of the place in Chinese (spoken or written), the taxi will take you anywhere. Minimum charge is RMB8 and I’ve been to short distances paying only this amount.

Because taxi drivers earn in 12-hour shifts (e.g. a rented one), they literally “rush” to take as many passengers as they can. I’ve had some crazy drivers make a 180 degree turn on a two-way street just to pick me up!

It’s also a bad idea to tell them you’re in a hurry because they’d morph into Michael Schumacher and race down the road as fast as they can. And guess what, only the taxi driver or the front passenger has a seatbelt!

The backseats are usually covered with fabric – you’ll see the seatbelts but NOT the buckles. If I have the boy with me, I’d tell the taxi driver to slow down because a child is in the car.

Of course, some taxi drivers take you for a ride especially if they see a foreigner (I’m a “pretty Korean“, remember?) i.e. taking the long route when there’s a shorter one.

I was engrossed in a text message when I realized he’d taken a different turn.

China also has these three-wheeled taxis like the tuk-tuk in Thailand or auto rickshaw in India. 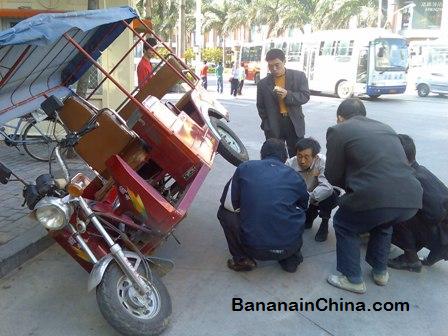 However, they are not that common and I’m not sure why. Safety issues?

Here’s a group of Chinese men tinkering with a buddy’s broken wheel. These cool guys didn’t mind me swooping around them like an eagle, looking for a best angle 🙂

Because we don’t have a car, we’ve had to use the bus a lot. Thankfully, the public transport system in China is one of the most efficient, organized and cost-effective ones in the world. 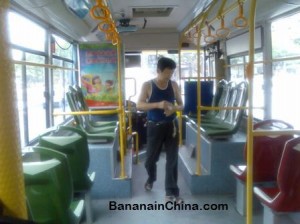 From the photo above, you can see many buses on the road. Of course, there are old buses and new buses and I’d always go for the new ones, if I can.

For only RMB1 in the cold months, you can go as near as down the road or all the way into town (it’s RMB2 in summer to pay for the air-conditioner).

Also, I’ve seen some of the most touching scenes of care and respect for the mother, the pregnant or the elderly on the bus:

Although her boyfriend pulled on her hand to “forget it”, she wrested her hand away and stood up. Soon, her boyfriend had to stand up too and give up his seat.

As his reward, he got to hold the girl by the waist 🙂 Did he win her heart? Hmm…I think he’s still under probation. 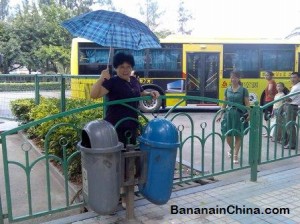 Besides romance on the bus, you also witness annoying scenes like this.

Either the municipal council or the owners of the Mall erected fences around the bus stop.

We used to be able to walk straight into the mall after getting off the bus – now, we have to walk ALL THE WAY down the road to get to mall. This poor woman is trying to squeeze her way through the gap in the fence!

Needless to say, this is NOT a popular mall for us.

Day Out with Thomas

People who have not visited China have NO IDEA what “1.3 billion Chinese” mean. To get a good sense of this, just visit the railway station. 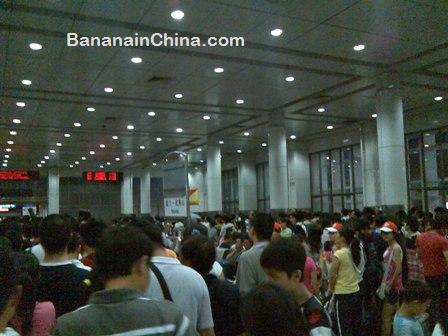 If this is the number of people waiting for the train on a regular weekend, can YOU imagine the crowd during the Chinese New Year when everyone goes home (Spring Festival)???

Or the National Day when everyone goes for a holiday???

A railway station on National Day is definitely no match for any crowded train station on the island of Sodor.

Hope you enjoyed reading about public transport in China!

Racial discrimination
One Child Only. Really.