After eliminating milk (and grapes, his favorite fruit) 100% from his diet, giving him another pack of Smecta and spoon-feeding him 1/2 pack of ORS, his diarrhea eased.

Also, he got much much better when I put him back on his Rhinathiol and ventolin syrup.

Although he irritated the hell out of me when he resumed his perky, bouncy, destructive drive-his-toy-car over anything on the floor, CHATTY old self, I’m really glad that he turned around. Phew…

After dropping him off at preschool, I tried to get back into my housewife-y routine of shopping for fresh foods, which is REALLY REALLY HARD especially after spending a wonderful month back home 😛

A mathematically-challenged Mum, my head spins when I buy items that need to be weighed since they charge per 500g (yi jin), not per 1 kg here.

What’s more, I have to be on the look-out for genetically-modified or artificial eggs, corn, sweet potatoes and whatever not! (although I’d NOT believe all I read in the forwarded emails about suspicious items in China). Why does there seem to be more anti-China emails than anything else?

The salmonella-contaminated Famous Amos peanut butter cookies from the US didn’t get as much airtime in the newspapers, radio or TV!!!

Did you know that in the US,

food makers and state safety inspectors are allowed to keep tests results secret. That keeps federal health officials in the dark even when products have been contaminated by salmonella or other dangerous bacteria.

If China, a developing country, is given so much pressure over the melamine-contaminated milk, then US, a developed country, should be given double the pressure, don’t you think? Especially as at least 40% of our food consumed is made in the US.

Since I get most of my fresh foods from the wet market straight from the local grocers, it’s quite a stressful shopping spree esp as I’ve got a fuzzy head of flu and a blocked nose.

This food group is the easiest to buy from the wet market although I’m suspicious of GIANT-sized carrots, turnips, sweet potatoes, lettuce etc as I wonder if they were genetically-modified or given some super-sized fertilizer!

Although some Chinese attack them with gusto, I’d smile and say they are too big for our little family. Can I have regular-sized veggies please? 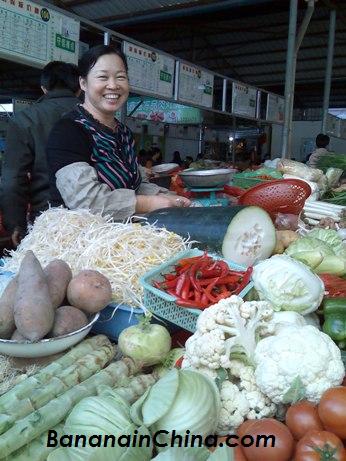 She guaranteed me that I’d come back for her sweet potatoes and true enough I did.

Since I always buy the SAME vegetables from her, she once gave me some tau geh (bean sprouts), flattish green vege (scallions?) and something else to try.

Although I INSISTED very, very nicely that I have no idea how to cook them, she thought I was hesitating the Chinese way – boy, did we put on a drama that day!

I was protesting they’d be wasted (I’m NOT a good cook and neither am I an adventurous person) while she insisted I try them as they were really delicious.

Later, she sensed that I WAS serious and reduced the amounts, phew! She still tries her luck hahaha

– Pork and beef can only be bought from the established supermarket because they would have gone through a health & safety inspection.

I bought some at the wet market once (to save time) but my super-sensitive nose picked up a whiff of “chemicals” while slicing it. After giving it to Hubby for a second opinion, we ditched the slab of meat and had fried eggs for dinner.

I made friends with a local Chinese woman from his preschool who showed me around the wet market and inconspicuously pointed out her favorite “organic” butchers (I forget the name). She also advised me to get the thigh meat, which are leaner and tastier.

I hope to find an “organic” butcher at my wet market so I can get all my fresh foods at ONE place! 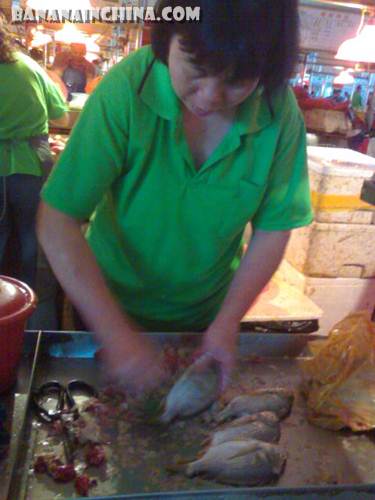 My little boy LOVES fish and I am blessed beyond words that the wet market nearby has rows of fish mongers but the only fish I recognize is the white pomfret.

I’ve tried other species but their meat is either tough or contains many, many little bones. Also, the fish on sale differ according to season. Today, white pomfret costs 16 yuan for 2 medium-sized ones.

Update: Check out the various fishes available in China.

I also need to be wary of sea or freshwater fish – the freshwater ones may have a muddy smell. Before I get any prawns, I’ll always ask, “Zhe ge shi hai xia?” (Are these prawns from the sea?).

After I pay for the fish, I’ll get them to “sa” (clean and gut) the fish for me and patiently endure their dubious looks and questions when I want the fins, tail, guts including the roe removed.

I’m trying to cook a fish soup, which is popular here but HOW do you make a fish soup exactly??? I’ve tried it with celery, carrots and tomatoes but the fish either turn out tough or stinky 😛 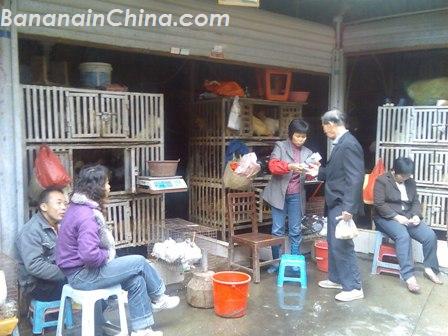 Shopping for chicken is another tough task esp when I have nightmarish visions of BIRD FLU each time I pass by the abbatoir.

Bits and pieces of feather float here and there as the chicken sellers choose one to show the prospective customer.

The Chinese customer would look at the chicken’s claws and look under the feathers before agreeing to its death sentence.

I’m no chicken expert so my rule of thumb is what my 2nd auntie tells me – mu ji (a hen) for soups! A very friendly chicken seller (who does home delivery) at another wet market told me that chickens with golden-colored fat are “organic” chickens, which are grain fed and ideal dun ji (chickens for soup).

As I’m also shown the chicken for inspection, I just give the poor chicken an overall evaluation – bright eyes, healthy look and firm claws??? Then, I take a few steps back from the abattoir and wait for them to slaughter, drown and pluck the chicken.

I have to remind and emphasize that NO, I do not want the head, neck, butt (bishop’s nose), feet, innards or skin. The usual comment I get is, “Zhen me lang fei! Bu hua le ni mai ji…” (What a waste! You’re not getting your money’s worth of chicken…)

To make them happy, I sometimes keep the liver to cook into a congee for the boy and me.

– I can easily get fruits from the wet market especially as I’ve found a favorite stall manned by 2 sisters. My standard question is always, “Tian ma?” (Is it sweet?) since the little fussy pot spits out anything sour.

The sisters will give me a taste of new fruits – an interesting combo is eating mini mandarins with the skins on (kim keat in Hokkien?) with peanuts! If I shake my head, they’ll urge me to try, saying, “Hen hau ci de! Si si kan…” (It’s delicious! Give it a try…)

Here’s an overview of local and imported fruits in China.

Since most Chinese eat congee or rice for breakfast, hardly anyone sells breakfast here other than KFC’s or McD’s. I love a hot breakfast but have not been able to find a decent noodle shop which does not overload on the oil, salt or MSG.

I thought I found THE best beef noodle soup until I saw the man preparing him – he must have put in 2 Chinese spoonfuls of MSG into my one bowl! When I told him I didn’t want any, the beef noodle soup tasted flat 😛

Thus, I can only find the dry stuff like:

I grab either a bean cake, the greasy ‘sticky, short you tiau’ (cruller or dough stick) or a man tou (dumpling, popular among Northerners) and munch my way through the market, while sipping on boiling HOT dou jiang (soya milk) plastic, throwaway cup (leeching BPA with each sip)…

The cai bao (vegetable dumpling) is OK as well but I don’t dare to try the rou baos yet especially as I tend to get diarrhea each time I’m adventurous (or bored with the regulars really)!