Now that we’re back on our “Movie Night” routine, we picked another Indian movie to watch – this time about a poor Maths teacher, Mr. Duggal and his family, a housewife, a daughter (a college student) and a son (a high school student). 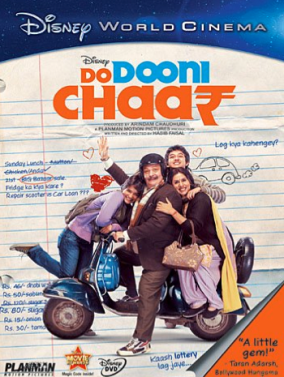 because it shows the reality of life today, which is even worse than when we were kids.

They really need a car but Mr. Duggal may not be able to afford the monthly installments unless he gets a tiny car.

One day, he’s desperate to get a car because his sister’s in law is getting married and she says that she will be shamed if he turned up at the wedding on his old scooter again.

Mr. Duggal doesn’t care but about “face” but his sister bursts into tears and thus, he’s in a dilemma of getting a car he cannot afford.

One things leads to another and you’ll find the funny and sticky situations poor Mr. Duggal gets sucked into.

The movie teaches us parents some valuable lessons:

Get your kids involved in family decisions. Now, it doesn’t mean that you can tell things point blank: “Your father is a useless drunk. I hate your father – your father is a stupid gambler.” While you may think your husband is useless, to your kids, he is their father, their hero. Don’t break their hearts.

Just talk to them in simple terms they can understand i.e. “We don’t have enough money now. I’ll buy you something we can afford when we have money later, ok?” And keep that promise.

Now that I’m in the education sector again, I’ve been looking for more of such themes in books and movies – there are so many things parents don’t know about education today.

No matter how busy we are or how distant they seem, we parents need to stay updated about our kids, their activities in school and their friends.