Hi! Now that we’re back in China, I’ve got to go back to the reality of food safety issues. 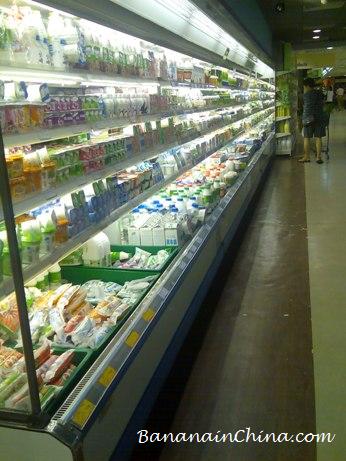 Here’s what I’ve been stressed with the past few months:

2. June 2011 – Rumours of another milk scandal in Guangzhou

“Aflatoxin is produced by a fungus that commonly grows in grain and legume crops such as peanuts, soybeans, corn and wheat.

It can be found in the milk of animals that eat tainted crops. High levels are toxic and carcinogenic, especially in the liver, but aflatoxin is not considered harmful at low levels.

Mengniu’s statement said the tainted milk was from one of its plants in Sichuan province in southwestern China.
It did not say how much milk was destroyed or how high the aflatoxin levels were. Fujian Changfu Dairy Industry Group has also apologised.”

FYI, Mengniu is the brand of milk on sale at Disneyland Hong Kong (as of our last visit there in 2008)

If you read the news article linked above, you’ll read of how:
– a dairy farmer and a milk salesman are EXECUTED
– 19 people are jailed for their role in the tainted milk
– Mengniu has apologized to the public and also destroyed the batch of tainted milk BEFORE it reached the public

As a mother of two kids who drink milk 2-3 times a day, do you think ANY of the above actions make me feel safer?

I am sad to hear of the 2 people who were executed because I don’t think I believe in capital punishment. Killing another person will not bring a dead person back to life.

As consumers, all we care is having safe milk for our kids to drink!

For now, we have been buying whole / skimmed (pasteurised/UHT) from Australia, New Zealand, US and Germany. Heck, I didn’t even know that Germany exported milk!

As mentioned in the article above, even the Chinese have this to say:

‘Businesses in China are destroyed by Chinese businessmen themselves.’

‘Don’t ever blame us on (sic) buying foreign goods. If I have a baby one day, I will also buy safer milk powder produced overseas.’