3 years ago, I entertained the idea of enrolling our kids in a Chinese school but now that I am a part of the educational industry in China, I am reconsidering my decision.

As much as I’d like our kids to learn Mandarin, which is one of the most difficult languages in the world to learn, I question the need to put our kids through:

Repetitive Chinese writing exercises – do you know how Chinese kids remember Chinese characters? By writing each character 40 times X 5 or 6 or 10 times until they get it right!

Check out the simple Chinese character duō (多) or “many” below: 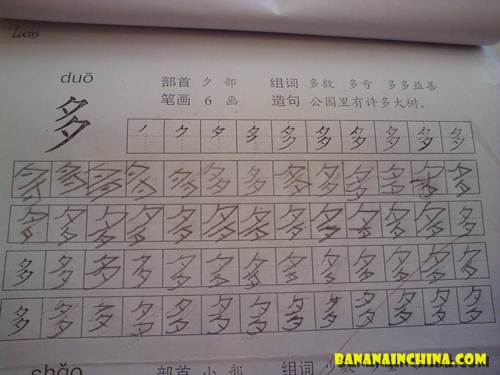 It nearly drove me nuts coaching my son how to write it out. This simple Chinese character looks deceptively easy because we had to get the strokes of the character CORRECTLY aligned according to the grid lines.

Can you see the progression of his strokes? He finally got it right but I wonder if he could write it out now since this exercise was done ages ago.

After writing the first two rows, he was ready to give up until I showed him how to align them on the grid lines. He was happy to write the third row but he complained that his hand was tired by the time we reached the fourth row!

If you don’t believe how tiring it can, try writing out 3-4 pages of Chinese characters in one sitting and you’ll know how difficult it is.

Looks like we’ll need to get him some Chinese writing work sheets:


Final examinations will be over soon and schools and universities in China will be off for their winter break.

Chinese kids totally deserve their summer and winter breaks because they work / study too hard! (Not to mention their teachers too…)

Honestly, I pity the Chinese kids because the minute they enter primary school (or xiǎo xué 小学), they are loaded with classes and homework that they have little time or energy to do anything else.

According to the The Telegraph:

“A scientific survey of 9 to 12-year-olds in eastern China found that more than 80 per cent worried “a lot” about exams, two-thirds feared punishment by their teachers and almost three-quarters reported fearing physical punishment from their parents.”

China’s one child policy means many children grow up with their parents and two sets of grandparents focusing exclusively on them, driving them to succeed in a nation of 1.3bn people where gaining entry to universities, government jobs and graduate careers is highly competitive.

Even among young children, mountains of homework and long hours of extra-curricular activities are not uncommon as China’s new middle classes strive to give their only children an edge over their playground rivals.
“The aspirations of many parents, who had limited educational opportunities themselves are now invested in their only children,” the study said.

The “urban” setting for the study of 2,191 pupils was Hangzhou, the provincial capital of Zhejiang, while the “rural” setting was a poor county in Quzhou prefecture, in the west of the province.
For rural children, the pressures take a different form, emanating from the still highly traditional system of Chinese education which emphasises Confucian obedience to the teacher and demands large amounts of wrote (rote?)-learning.

Last year Unicef, the UN’s children’s fund, used its Universal Children’s Day to promote children’s “right to play”, a right which it said was often forgotten.

“The issue of child stress is definitely on our radar,” said Dale Rutstein, a spokesman for Unicef China. “In rural areas we are still finding the emphasis on memorisation and parroting back information and are working on making education more child-centred.

“But in bigger cities like Beijing and Shanghai the system is more reformed and quality has improved but people’s expectations are rising fast, which puts more pressure on the children. This is not unusual for economies in transition, similar traits were seen in Japan and South Korea.”

As well as school stress, there are longer-term questions over whether China’s traditional and authoritarian schooling system is suited to producing the kind of independent-minded students essential to innovation in a modern, knowledge-based economy.