Since we eat home-cooked food every day, which means Chinese food from Mondays to Saturdays, we take a break on Sundays by having breakfast at KFC. And that’s only because KFC is nearer to our place and also there are more “healthful” choices at KFC compared to McDonald’s or Burger King.

Unlike McDonald’s and Burger King, which only serve deep fried chicken or hamburgers, KFC serves 3-4 types of congee:
a) Century egg with lean pork
b) Chicken and mushroom??? I forget as we hardly order this one.
c) Beef with egg
d) Glutinous rice 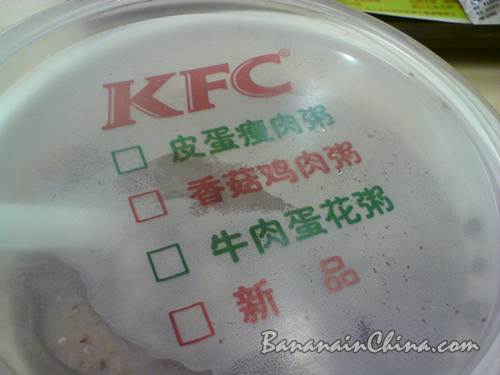 Here’s the black or red glutinous rice congee. The baby likes this and she can finish almost half a bowl on her own. I used to like this congee too since it’s vegetarian but lately, it’s become rather sweet and starchy. The boy hates this and will NOT touch it at all. 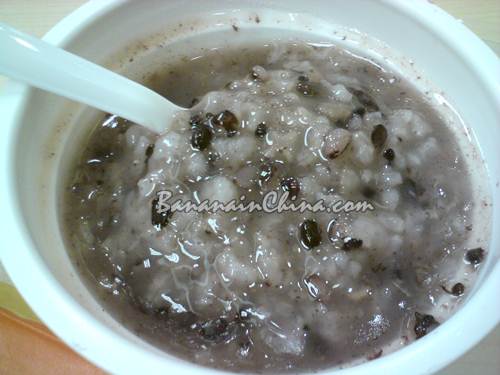 His breakfast is usually an egg burger with a cold / warm cup of Milo. That’s a cup of soya bean milk, which Hubby opts for sometimes instead of coffee 😀 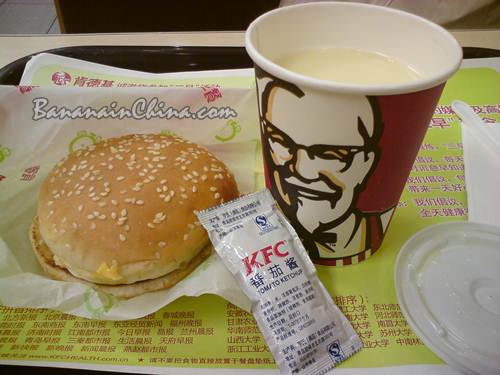 Here’s the chicken and mushroom congee with a baked 油条 (yóu tiáo) (twisted dough, which is usually deep fried). All of us like the 油条 (yóu tiáo) and I always order the plain one. Sometimes, the KFC staff has the sweet 油条 (yóu tiáo) lined up on the rack but I will always say, “Bu yao.” Why give the kids more sugar than they need? 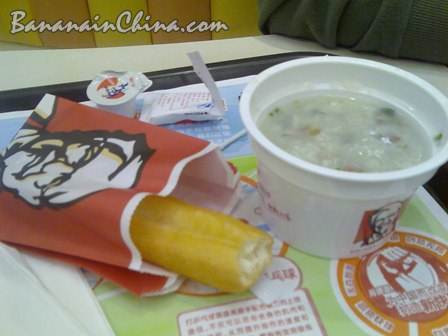 We’ve only had lunch once at KFC and that’s because neither of the kids like fast food, thank God. They only like the french fries. The chicken nuggets are either too dry, too crusty or too salty as are most of the chicken burgers.

The only time we had lunch, we ordered this vegetable and egg soup but I feared that it’s full of MSG so I ended up feeding the tot the pieces of egg and vegetable! 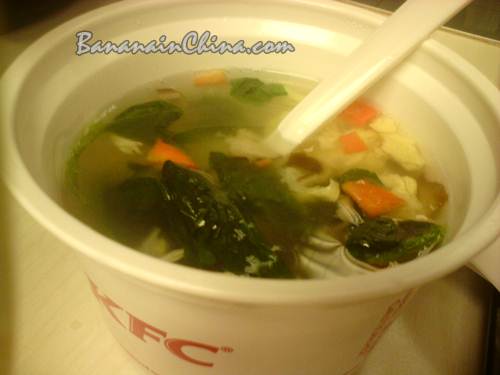 Because KFC serves these Chinese-style dishes, it’s more popular than Burger King and McDonald’s. Also, KFC outlets usually have a bright, cheery and clean play area for kids. Beats me why McDonald’s is doing so poorly in China. Anyway, KFC recently had a spate of bad publicity for failing to change its cooking oil for days. Is this really new?

I’ve worked in KFC when I was a teenager more than 20 years ago and I believe they didn’t change the cooking oil that often then! Also, a few of my students work at McDonald’s and they tell us not to eat at McDonald’s because they only change their cooking oil every 3 days or so O_O

In any case, I avoid all fast food restaurants if I can help it, whether in China or anywhere else. If I need a Western food fix, I’d go to a Western restaurant or if worse comes to worse, make my own hamburgers although I haven’t got that desperate yet. Let’s eat healthy, shall we?