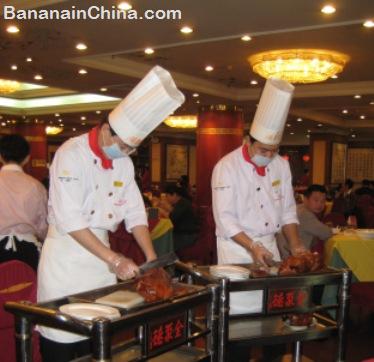 When we visited Beijing last year, we were lucky enough to try TWO types of Peking duck – one at the famous Quan Ju De restaurant on Wangfuqing Street and another at the Olympic Green.

QUAN JU DE RESTAURANT
Four hungry families (with 6 kids) trudged down Wangfuqing Street and trooped into this crowded restaurant tucked away among some other shops on this busy, glitzy shopping street. 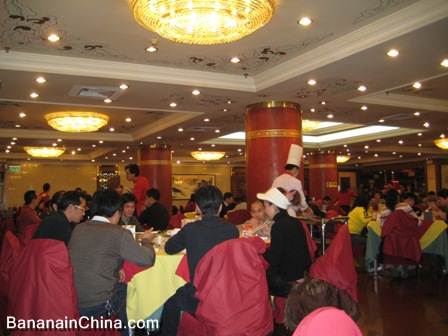 While the Chinese-speaking experts ordered from the menu, the rest of us either used the washroom and or asked for tea refills because we just loved the extra-long spout on the teapot! Only two refills because we couldn’t drink that much tea anyway hahaha

Because we ordered two ducks, we got two butchers 🙂 They were skilful and swift – although a bit jaded (similar with the Chinese waitress) because Quan Ju De is highly popular among the tourists, Chinese or international.

Judging by the certificate indicating the XX,XXX,XXXth duck we’re eating, I could be the XXX,XXX,XXXth tourist (or annoying foreigner) snapping photos too 🙂

How’s the duck? Mmmm…as delicious as it looks! The Peking duck skin was thin and crispy while the meat was juicy, tender and succulent.

Everyone wasted no time in wrapping up pieces of Peking duck meat in paper-thin pancakes piled with spring onions and the sweet sauce. Really yummy! I think everyone had 6-7 pancakes on average…

My fussy eater? He loved the pancakes by itself but because the duck meat was so tender, he didn’t mind being fed slivers of it. We also ordered white rice and ate other Chinese dishes but the highlight at Quan Ju De is definitely the duck. Got to eat it while it’s hot, though!

I Have Nothing to Wear!
Lunch at a Hunan (湖南) Chinese restaurant