While I brace myself for the upcoming check-up at the maternity hospital, I vividly recall the pre-K health check-up.

Before a child enters kindergarten in China, they need to go for a full medical check-up. Foreign children who have attended daycare or kindergarten in their home countries before coming to China are exempt from this check-up.

A good friend picked us up and brought us to the children’s hospital (or clinic) within our district. I wouldn’t have recognized it as a hospital because it was housed in a nondescript 4-5 storey building alongside shops selling nuts and bolts, zinc roofing and other industrial items!

Here’s the crowd ‘lining up’ at the counter.

I couldn’t resist taking a photo of this lady carrying her toddler in a traditional basket! 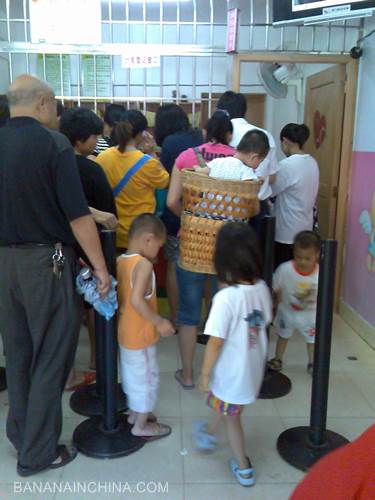 My friend made a deposit of about 100 yuan at the counter before we could proceed. Yup, pay first…

We went upstairs and came to an open waiting area with many, many parents sitting  with their precious ones (baobei). The setting reminded me of a government hospital in the rural areas of Malaysia in the 1980s.

I’m really thankful to the Chinese-speaking friend who brought us there because she:

There were so many children, it was easy to lose sight of him! Happy to have my dear friend with me.

We searched high and low along a narrow corridor for the room we were supposed to wait in and planted ourselves in the doorway.

According to her, we had to be close by or people jump the queue quickly if they don’t see you after a few calls.

If the scene of groups of 10-20 fathers, mothers (openly breastfeeding), children and crying babies crowding every room isn’t enough to unnerve you, then the giant plastic containers for the babies to pee, poop, vomit or for people to spit in or throw rubbish will!

There are probably only a few toilets available that parents are not bothered to bring their children there (the toilets are probably filthy anyway). Thankfully, the toddler was still in diapers then and is used to a morning dump before we go out.

I just shudder at the thought of catching an infection here because
a) it’s so crowded and
b) the open bins are full of spit, pee, poop and vomit 😛

The first check was a physical one where his temperature was taken, his height and weight measured.

You have to admire the Chinese nurses because they were all very calm, friendly and patient in the midst of such pandemonium.

Halfway through a check, you’ll find an anxious parent hauling their naked baby over to show diaper rash or some other skin rash or asking a question.

Without losing their rhythm, the nurses would patiently answer the parent’s question and then go back to the check on hand 🙂 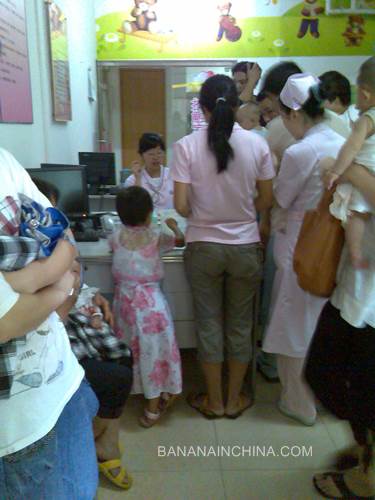 Also, I had to take off his diaper (gasps of shock from the local Chinese to see a 2.5 year old boy still in diapers!!!) so that the nurse could look and feel the boy’s genitals…

When I followed the toddler to the back of the room, I came upon two nurses showing new mothers how to give their babies a massage.

Isn’t that great? In Malaysia, you need to PAY for baby massage sessions, which is ridiculous actually… 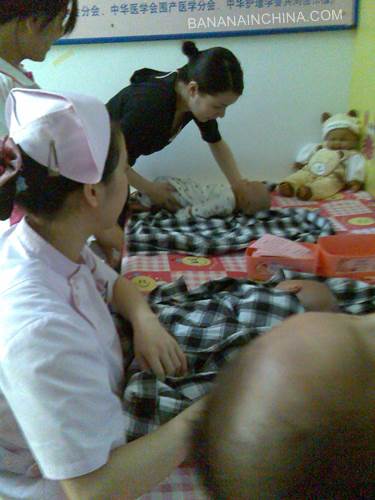 You’ll notice that almost every baby is wrapped in a black-and-white checked 100% cotton swaddling cloth (with aluminium talismans sewn in red thread), believed by the country folk around the rural areas to protect the baby.

I think black-and-white checked cotton cloths are a good indicator to everyone on the road or on the sidewalk that you’re carrying a baby!

From my chats with Chinese mothers, the hospitals are working hard to educate the older generation and folks in the rural areas to reduce the wrappings on newborn babies during summer to prevent heat rash and overheating.

I can just imagine my own Chinese grandmother going…

“Hmmph! And let the baby catch its death of a cold!”

According to my Mum, my grandmother swaddled me up tightly too in a 100% cotton nappy square when I was an infant under her care 🙂

Over here, you can see babies red in the face, with rashes and yowling away because the overly-concerned grandmother, mother-in-law or mother had the poor baby dressed in long shirt and pants, mittens and booties, wrapped in a cotton cloth and then swaddled up in thick towellng…in SUMMER (36-40 deg C)!

After the overall physical check, we then went for an eye check-up, which was really cool.

The doctor held a Star Wars-looking gadget which looked like a 70s-style rolling film camera – the tricky part was getting the toddler to stand still and stare intently at it for a few seconds.

I couldn’t snap a photo because I had to put him on my lap while my dear friend called out to him in front. However, the cheeky toddler ended up smiling at her and crinkling up his eyes!

The eye doctor got a bit frustrated and grumpy after a few tries (and probably cursed her decision to specialize in pediatric opthamology) but we finally got him to sit still long enough to certify that his eyes were OK.

Lastly, we went back downstairs for the BLOOD TEST.

For most visits to the doctor, the toddler is co-operative especially when I explain to him what’s going on and what will happen.

Since he was busy checking out the gadgets, boxes, chairs and cupboards all around him, he didn’t pay attention to the children getting their fingers pricked.

I decided to grab him and sat him on my lap to show him what’s going to happen. He was very curious as he observed this:

The lab technician using a pin (I forget) to prick a child’s index finger and then squeezing blood into a thin (about 0.2 cm) straw. No plates or tubes here for blood specimens.

It felt very painful because kids between 3-6 years old were yowling and yowling like crazy before, during and after the test!

Preparing my little tyke, I explained that the ‘uncle’ was going to do the same for him and I got ready the pack of stick biscuits with chocolate dip to soothe him later.

Guess what? He didn’t cry at all! He was amazingly calm when the lab technician pricked his finger and squeezed it to draw a blood specimen.

The surrounding parents were naturally impressed.

I almost cried at my brave little boy.

However, the technician botched it up by squeezing too slow that the blood flow stopped. So, he had to squeeze his little finger again!

By then, the little fella got impatient and his finger probably hurt from all THAT squeezing. At that point, I begged the lab technician to please, hurry up…

When it was done, I gave him many, many kisses and praised him for being a very, very good boy.

Even my friend praised him and he got all the biscuits with chocolate dip! (Minus 2 sticks I gave to an annoyingly, loud, crying girl to shut her up)

Later, I bought him a special toy to reward him for his brave little act and couldn’t wait to tell Hubby all about it.

Now, Hubby wonders if this scaredy-cat Mummy will be as brave as her little boy? I definitely don’t think so!