Can you read or speak Mandarin Chinese? You’ll need to if you want to visit China. Check out the Chinese instructions on my washing machine: 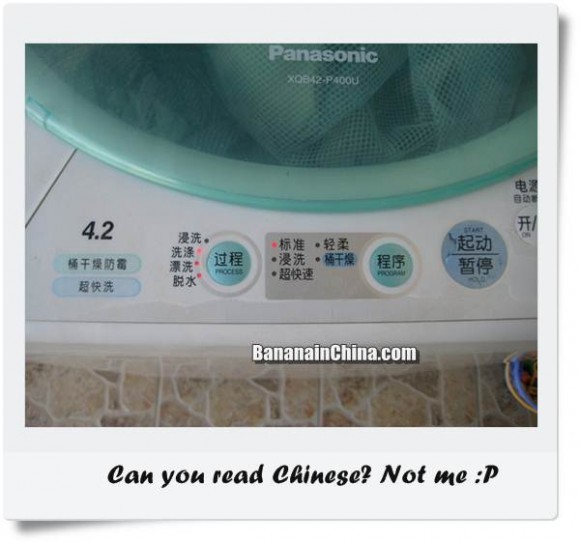 First, let me introduce myself…

Once upon a time, a family of three moved to China (and later, we had ‘made in China’ baby).

As it was my first visit to China, I was shocked to find that almost ALL food labels, road signs, restaurant menus, and instructions are in Mandarin Chinese.

If you intend to visit China, I strongly suggest that you read up on Chinese culture and learn some Mandarin Chinese a month BEFORE your trip.

Here are some of the best learning materials I recommend:

Now that we found a Chinese teacher living, we are hoping to learn to speak zhongwen or hanyu 🙂 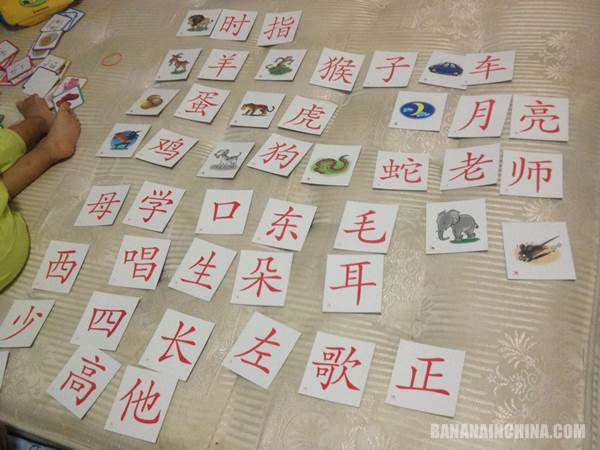 Learning Chinese gives me a new perspective of the world since Chinese and Japanese languages use logograms (derived from hieroglyphics i.e. a picture morphing into a character to represent a syllable or a sound).

Now, I’m starting to understand what my Chinese-speaking friends mean when they tell me that some combination of Chinese characters are,

“just sounds, they don’t mean anything!”

I must apologize to them that I was so stupid before :S

Two, I am seeing the world through Chinese eyes since we are learning basic vocabulary, which is fascinating when you compare them with English (and mind-boggling when they don’t connect or sound anything like the original!)…

For example, Spain is as Xibanya, Australia is Aodaliya, England is Ying-guo (sounds almost similar) but American is Mei-guo and Portugal is Pu-tao-ya! And South America is Nan Mei *_* which makes sense really because “nan” is South and “mei” is a shortform of America. Interestingly, Mei-guo means “beautiful country”.

Third, it’s agony and torture learning how to make new sounds in a language completely different from your own!

Also, I can’t tell the difference between “zh” from “z” or “chi” from “ci”! Other than that, I’m alright because my Cantonese helps me translate most words easily.

Thankfully, our Chinese teacher is not that strict with pronouncing it the Bejing way i.e. with “dianr” but she insists we enunciate each syllable precisely – no swallowing allowed!!!

She’s encouraging us to take the HSK (Hanyu Shuiping Kaoshi), or the Chinese Proficiency Test by Hanban /Confucius Institute Headquarters.

New HSK Test
HSK test began to be designed by Beijing Language Institute at Beijing Language and Culture University (BLCU). In March 2010, the new HSK test was introduced. The new HSK test was launched by Hanban in an effort to better serve Chinese language learners. The test is the result of coordinated efforts by experts from different disciplines including Chinese language teaching, linguistics, psychology and educational measurement. The new HSK test combines the advantages of the original HSK while taking into consideration recent trends in Chinese language training by conducting surveys and making use of the latest findings in international language testing.

HSK (Level I) assesses test takers’ abilities in the application of everyday Chinese (Mandarin). HSK (Level I) is intended for students who have studied Chinese for a semester (half an academic year), with 2-3 class hours in each week. These students have mastered 150 commonly used words and basic grammar patterns.

Test takers have an excellent grasp of basic Chinese and can communicate in simple and routine tasks requiring a simple and direct exchange of information on familiar and routine matters. 300 words vocabulary list.

Test takers can communicate in Chinese at a basic level in their daily, academic and professional lives. They can manage most communication in Chinese when travelling in China.

Test takers can converse in Chinese on a wide range of topics and are able to communicate fluently with native Chinese speakers.

Test takers can read Chinese newspapers and magazines, enjoy Chinese films and plays, and give a full-length speech in Chinese.

Are you preparing for the HSK Test too?
Here are some storybooks, flash cards and practice tests (jia you!):


P/S Sorry I’ve not been able to reply to comments or bloghop lately – life has just been REALLY busy! With preschool, cooking, grocery shopping, @#$%^&* house repairs, winter clothes, shoes and Christmas shopping, a bit of work and packing for home, blogging has taken a back seat…

Vote for my boots!
Milk products from China