We’re just back from our Hong Kong holiday. Yes, we’re CRAZY to join the summer crowd. Initially, we wanted to relax amidst the beauty of Hangzhou but in the end, his eczema lotions took priority.

While we were there, we visited this kiddyland. Interestingly, Disneyland didn’t amuse him much because he isn’t a big Disney fan plus it was HOT AS HELL walking around this concrete jungle.

It’s pathetic if your kid isn’t excited in a theme park and both of us had to psyche him up by pointing out, “Look, there’s Mickey! And Minnie…! Oh, Winnie the Pooh…!”

However, this Mom knows that he’s only interested in Tigger. Unfortunately, Tigger bounced into view only once 😛

THEN, we saw and heard this train chugging into Main Street when we walked in: 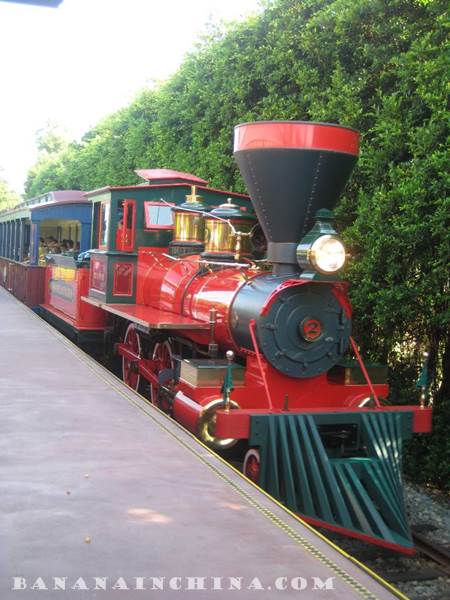 The real, live steam train got him REALLY excited!!! He was stuck at the miniature version for ages… 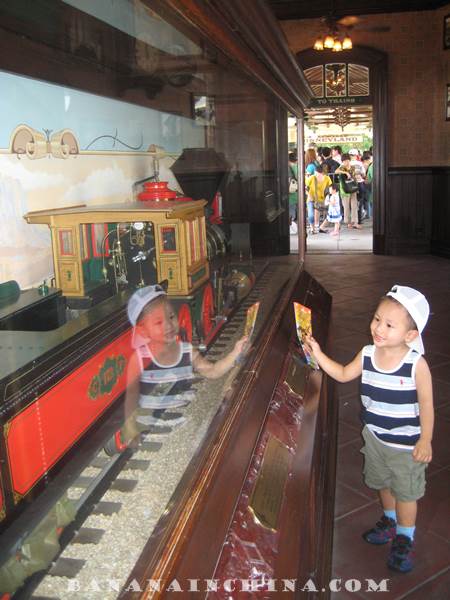 I was panicking because the lines were building up and mind you, all the “happy” people in lines get defensive when they thought this Mother and child were cutting queues.

Sigh, I had to make a big show of passing the toddler to Hubby who was holding our spot at the front!

Just so he’d have fun at this place, we rode the train at least 6 times.

He wanted to sit as close as possible to the engine and the driver and hear the bell clang. 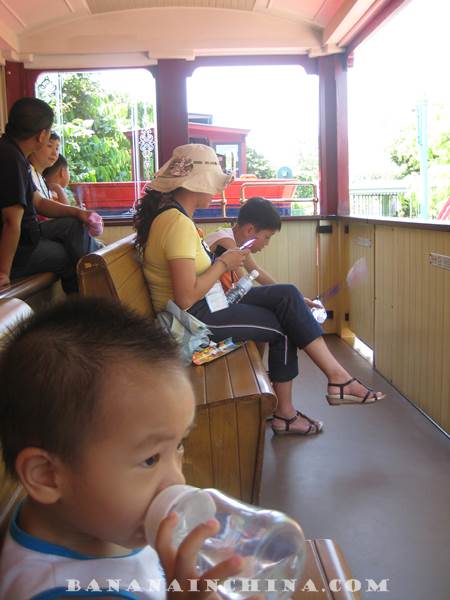 Disneyland Hong Kong isn’t that big, with only stops at Fantasyland, Adventureland and Main Street etc, which means we had to endure the radio announcements, fake scenery and fake animals over and over again.

Aaargh…it’s pure torture for us but seeing his happy, excited face made it worth it 🙂

On hindsight, I think we’d do it again and again too LOL

Besides the train, we went for the Cinderella Carousel, which was quite magical for this Mummy – it’s my first carousel ride 🙂

The toddler and I shared a large horse, which took me a while to get my butt up onto LOL 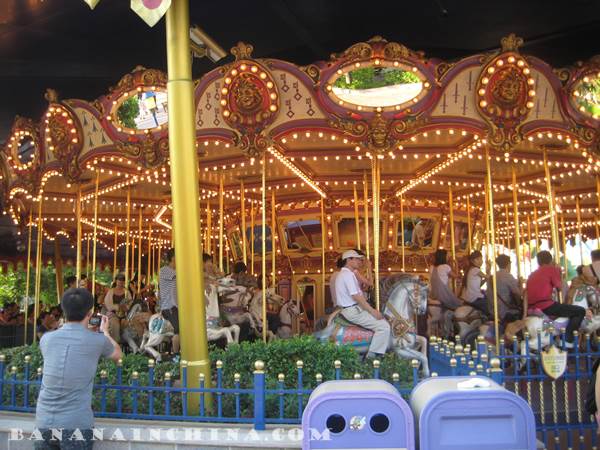 When we stopped, I thought he’d like another go but he couldn’t wait to clamber down. 😂

At the Flying Dumbo, we met one of the most kiasu (Chinese=competitive, selfish) mothers in the world. The lines are well managed yet some parents aim for a particular seat?

The Flying Dumbo can fit only 2 people. Hubby wanted to get into the one in front of us to capture a shot of the toddler and me.

We stood in line, got our passes and headed for 2 seats when the gate opened.

Hubby almost had his foot in one Flying Dumbo when a 6-7 year old boy dashed in front of him and plumped his butt in!

Of course, Hubby didn’t want to fight a ride with a kid but then a lady with a giant Nikon camera ran in and sat next to him.

Considering how late she is, we suspect that she’s behind us in line but got her son to reserve the spot. As there was an empty Dumbo in front of her, we tried telling her to go to that one since Hubby wanted to be with us.

This woman refused to budge!!!

Did the toddler enjoy the rides? I couldn’t tell because he had Mr. Bean’s bored, ho-hum expression during the rollercoaster ride. I think I was more excited 😛

I think his mind was set on trains because when the rides stopped, he went,

Then, he had fun driving in this sportscar (see the kor-kors and jie-jies crowding around for a turn already?).

The line at the space car in Tomorrowland ride was too, too, too long 🙁 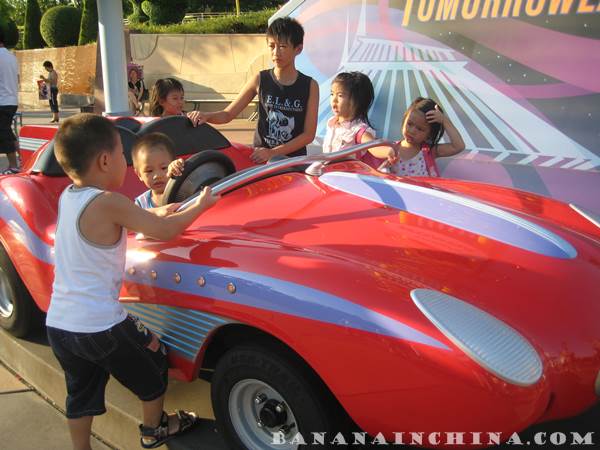 We headed for the Grand Banquet Hall for the air conditioning and lunch. The poor fella was melting under all that heat – he had his water bottle latched to his mouth and many of his hankies were drenched with sweat. 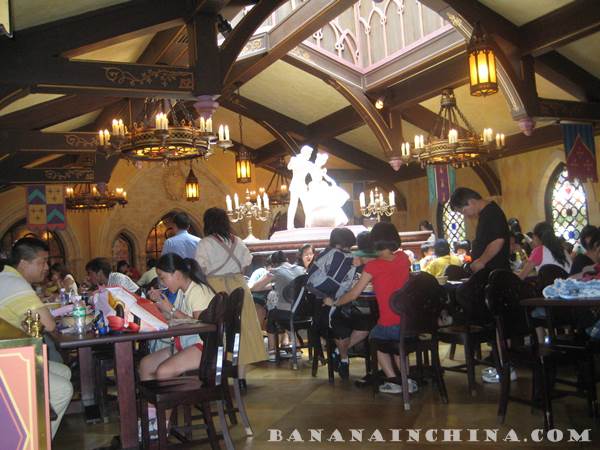 Be prepared to pay HKD55 (RM25+) for a simple meal of burger and fries, bento lunch or chicken rice.

We spent HKD38 (RM15+) on his kiddy lunch of creamy chicken on rice and a box of Mengniu milk. Seriously expensive and he didn’t even eat his rice!!! 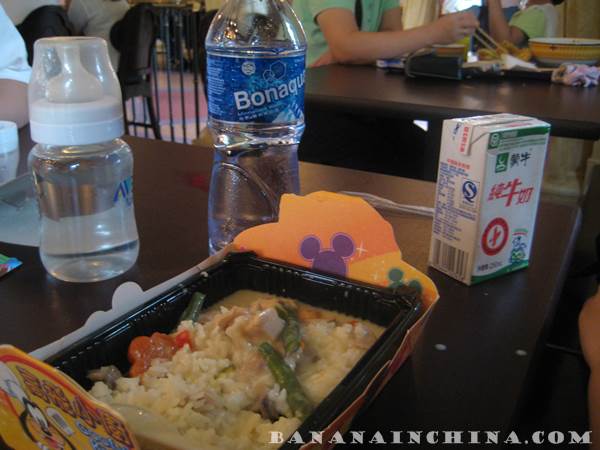 After he knocked off for his nap, this Mummy HAD to plonk her head flat on the table for a nap too…hehe, many folks were dozing away too.

I was SUPER exhausted because I had to haul him all over the place! It was unbearably hot even though I was in a tank top (and ok, a silly pair of calf-length culottes because I’d only packed a pair of shorts).

The toddler was tired from the heat, he wanted me to carry him all the time!

Hubby offered to take him a few times but after a while each time, he’d whine,

With temperatures as high as 35-36 deg C, who wants to leave an air-conditioned room?

When the toddler woke up, we wandered around to see what else we could do at this EXPENSIVE amusement park.

We went for Mickey’s Philarmagic 3D show, which was quite interesting… 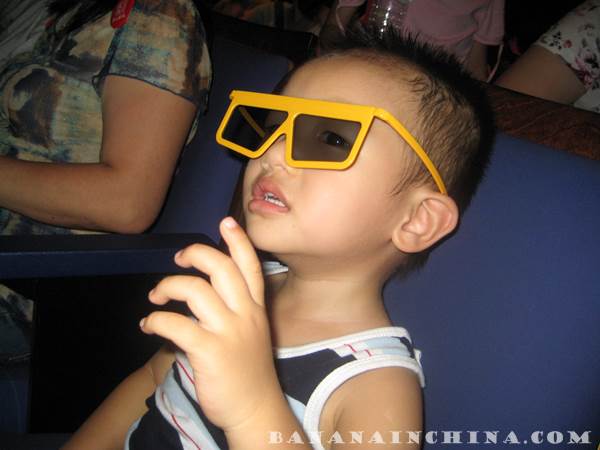 You enter a cinema-like room and put on a pair of orange-rimmed 3D dark glasses.

I was a bit cynical about the glasses, thinking that it’s a con job.

With the glasses on, the characters and actions (based on “Fantasia” but is a medley of other popular Disney characters e.g. Ariel and Sebastian the crab from “The Little Mermaid” and also “Aladdin”) appear larger than life and seem to fly out at you, almost right to the tip of your nose!

The surround sound system is fantastic because it makes you feel as if Disney characters like Mickey, Minnie and Goofy are in different spots around the room.

The toddler was frightened by a few of the 3D segments (and the loud music) that he ended up on my lap.

I had to reassure him several times that it’s just a cartoon, the characters were not real and also took off the 3D glasses when the characters “flew” off the screen…

Thankfully, it was a brief show because he started crying towards the end.

Disney’s 3D Philharmagic show is too overwhelming for 3 year olds.

Various Disney characters are on site for photo sessions, which again you have to line up for.

Just for the fun of it, we managed a family pic with Donald Duck.

We were on the look-out for Tigger but he was nowhere to be found!

Then, we spotted Buzz Lightyear in a corner with only 3-4 people in line and aimed straight for him. Guess what? Buzz goes for a pee break!

Initially, we thought of staying on for the pyrotechnics display at 8 pm but since he didn’t eat a good lunch and was a sack of potatoes in my arms, we headed home.

To make this Disneyland trip more fun for him, we went for ANOTHER ride on the train.

We also had a PURPLE (blackcurrant flavour) ice jelly and a Mickey Mouse shaped ice cream at HKD12 each.

The purple popsicle’s quite nice 🙂

I wanted another one but Hubby said NO. Party pooper 🙁

Now that we’re HKD700 (2 adult summer period tickets), HKD100+ for food and HKD120 for my Winnie the Pooh cap poorer, this Mummy definitely needs to work (or blog) harder after this…

Will we go back? Maybe when he’s older and if there’s a promotional package 🙂

1. Bring a stroller for your kid to rest in – strollers on rental are HKD50 per day
2. Bring his favourite snacks and water – esp if he’s a fussy eater. Most of the snack foods retail at HK12 each and were those regular dry, tasteless or horribly salty/sweet types which are not exactly toddler-friendly.
3. Wear the thinnest clothes you have, the comfiest pair of shoes and yup, your own umbrella and caps! Unless you want a HKD120 one 🙂
4. Children under 3 years old get in FREE but unless they are big Disney fans, there are only a few rides to amuse them.

Many toddlers were crying from the exhaustion, heat and probably, from the crowd and the over-stimulating environment.
5. Wait times for rides and shows are indicated in front of each booth – we only went for those with 10 minutes wait. We wanted to go for the racecars, which his height qualifies him for but it was a 45 minute wait!
6. The taller your toddler, the better for him/her because the safety regulations in place require kids to reach a certain height 🙂

Baby Einsteins: Not So Smart After All
Stomach Ulcer?